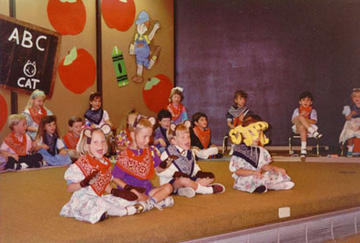 Every year since 1986, Newcastle students have participated in two annual off-site musical performances for parents.

In the ’80s and early ’90s we held the programs at the Whitmore Library in Sandy. Since the mid ’90s we have held them primarily at the historic Draper Theater. This photo is a class of three year olds at their year-end program in 1991. Three of the children pictured are cousins Hayley and Chelsey Jensen and their neighborhood friend Troy Thorpe.

In 2009 Hayley left on a mission to Germany and Chelsey finished college and Chelsey got married. Troy returned from an LDS mission in 2007 and returned to his studies at the University of Utah.